END_OF_DOCUMENT_TOKEN_TO_BE_REPLACED

Notice is hereby given that the Annual General Meeting of the Club will be held in the Classic Room at KCC Park, 655 Westernport Hwy, Skye 3977 on Saturday 18th May, 2019, commencing at 9:00AM.

BUSINESS:
1. Apologies
2. To accept and confirm the Minutes of the previous Annual General Meeting
3. To receive the President’s Report
4. To receive the Treasurer’s Report
5. Election of Office Bearers and Committee – see below
6. Election of Auditor
7. Determination of Honoraria
8. Presentation of awards for 2018 Show Champions and performance titles
9. General Business

** Any other general business must be received in writing by the Secretary by Friday, 19th April 2019**
In accordance with the Club’s constitution, all Office Bearers and Committee automatically retire at the Annual General Meeting but are eligible for re-election by re-nomination. A Nomination Form is included with this issue of the Chatter and is self-explanatory. Further nomination forms may be obtained from the Secretary or website should they be required.
Please Note: All nominations close with the Secretary on Friday, 19th April 2019 at 6.00pm.
Note: To be eligible to vote or stand for office at this Annual General Meeting, all persons must have been financial members of the Club prior to the 1st October 2018.

The Welsh Corgi Club of Victoria is proud to announce the details of the 69th Championship Show – July 2019 [PDF]. Mrs Christine Sonberg, Norway (Analog and Cymraeg Ci) (Cardigan and Pembroke) has accepted our invitation to judge this event.

Entries close on Monday, 15th July 2019, so update your calendar so that you can join us on the day! We look forward to seeing lots of Welsh Corgi enthusiasts there. 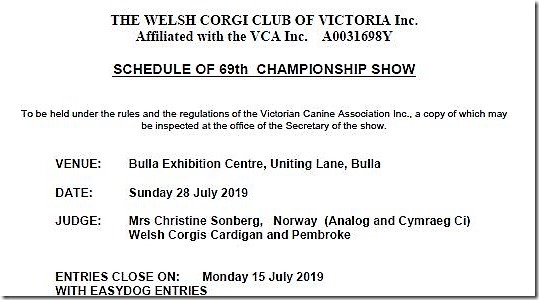 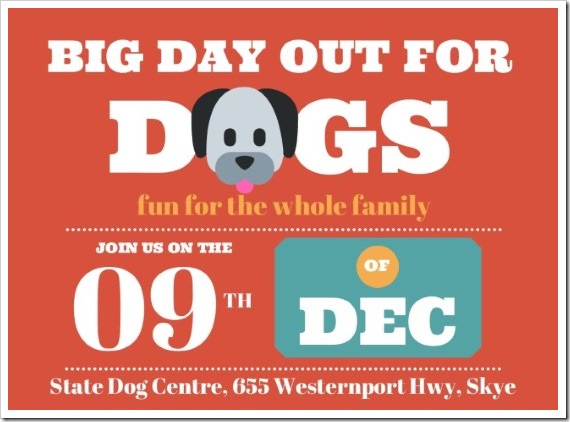 The Welsh Corgi Club of Victoria will be at the Dogs Victoria Big Day Out for Dogs 2018. The Big Day Out will be held at the State Dog Centre on Sunday, 9th December 2018. Entry is free and well behaved dogs on leads are welcome.

This is a great opportunity to come along and catch-up the Corgi Club, meet some Corgis, ask questions and share stories. As well as all different breeds of dogs there will be a Canine  Christmas Market – you are sure to be able to find a gift for your dog or dog-obsessed person in your life.

We look forward to seeing you there.

END_OF_DOCUMENT_TOKEN_TO_BE_REPLACED

The Welsh Corgi Club of Victoria is proud to announce the details of the 68th Championship Show – November 2018 [PDF], our traditional championship show. Mrs Gayle Garvin (USA) of Garvin Corgis (Cardigan and Pembroke) has accepted our invitation to judge this event.

The 67th Championship Show will being held at KCC Park, Skye on Saturday, 3rd November 2018. Further details are included in the 68th Championship Show Schedule [PDF]. Entries close on Monday, 22nd October, so update your calendar so that you can join us on the day! We look forward to seeing lots of Welsh Corgi enthusiasts there. 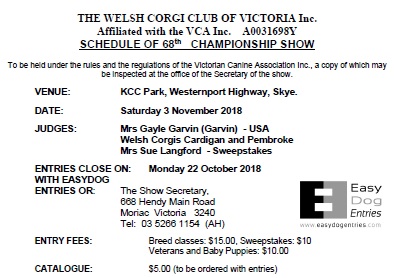 END_OF_DOCUMENT_TOKEN_TO_BE_REPLACED

The Welsh Corgi Club of Victoria is proud to announce the details of the 67th Championship Show – April 2018 [PDF].

The Welsh Corgi Club of Victoria would like to inform Corgi exhibitors that our April Show judge, Mrs Carole Vaughan, is unable to fulfil her appointment due to health reasons. Although we are disappointed that Carole cannot be with us, we are pleased to announce that Mrs Joan Hutton has accepted our invitation to judge the show. Entries close on 1 April, so please get them in so you can join us on the day! We look forward to seeing lots of Welsh Corgi enthusiasts there.

The 67th Championship Show is being held at Bulla Exhibition Centre, Bulla on Saturday, 14th April 2018. Further details are included in the schedule [PDF]. 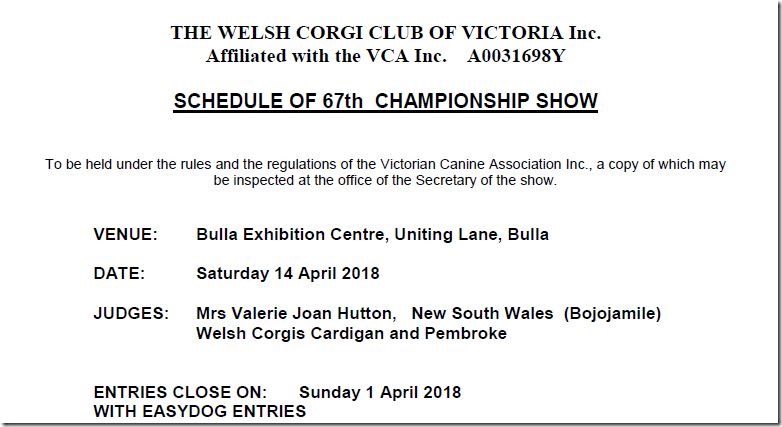 END_OF_DOCUMENT_TOKEN_TO_BE_REPLACED

The April 2017 Championship Show has just finished, and we were blessed with good weather, a marked contrast to last year’s mid-year show. Our thanks go out to our judge, Ms Lisa Carpenter (QLD), our exhibitors and their dogs, and all the other people that came along to see show Corgis do their thing. (Best In Show, Cardigan, Pembroke, Cardigan Classes, Pembroke Classes).